Our three-year assignment in Libreville began with a curious incident at the airport. With six rolling suitcases in tow, we exited the customs area, where a uniformed man was inspecting a styrofoam box. “Pangolin,” he said in a defeated French accent, shaking his head. A quick search later on my phone revealed that Pangolin, an ant-eater-looking animal, is poached in the Congo Basin for its scales. On a positive note, we’ve also learned that Jeff Bezos’ Earth Fund has pledged $35 million to Gabon for conservation efforts.

During our first two weeks, jetlag morphed into temporary overwhelm, discerning the perils and promises ahead. Even now, commencing week three, my alligator brain craves creature comforts and familiarity. I miss having a car, but also the absence of seemingly insignificant things such as my own comfy pillow and bath mats. Air thick with humidity leaves a thin, damp sheen on the chilly tile inside our home, which seems ironic; cold feet in a tropical climate. Moisture clings to the dust I bring home after walking Biscuit outside, creating a trail of black footprints like a Sherlock Holmes cartoon across the white floor.

Hacking up a whole pineapple for breakfast with a dull blade, I long for my sharp kitchen knives. “Mom, I didn’t know pineapple came in octagonal shapes,” Ramsay teases. I practice yoga breathing and concentrate on finding the beauty and counting our blessings: we are safe, our condo has a screen porch, we live near the ocean, people are kind, and I’m able to converse with the locals in French. In the evenings, lovely pastel colors bleed into the sky as we watch a fiery orb slip rapidly behind the horizon.

Having grown up in the U.S. on the east coast, it seems odd to view the Atlantic from the west. Below swaying palms, corpulent trunks of driftwood lay strewn across Libreville’s beaches, their chalky branches reaching toward the ocean with knarled, thirsty fingers. Tangles of roots like wild, messy hair add to the untamed seascape. The scenery is gorgeous, but the water near our house isn’t swimmable due to sewage, old shoes, plastic bottles, and shards of the forgotten. Perhaps Ramsay and I can participate in beach clean-ups and join the Sea Turtle Patrol we’ve heard about. 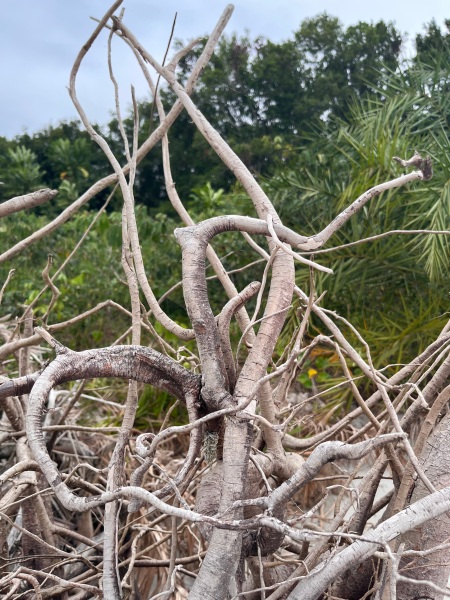 There have been surprises, good and bad. After accepting an impromptu invitation for a glass of wine on the beach to bid an embassy friend farewell whom we’d only just met, my mouth hung open slightly when bats appeared with the wingspans of crows and heads nearly as big as kittens. (not kidding). But the next morning, also taking flight, were uplifting lemon-yellow weaver birds, turquoise-tinged Kingfishers, and a grey and red parrot; the yin and yang of living in an exotic locale.

Parts of the city resemble the Caribbean, full of tropical vibes, dance music, and riotous color: the brightly painted houses, cheerful Hibiscus, lizards with orange tails, and exotic flora and fauna. As in many developing nations, the stunning beauty here is juxtaposed with dilapidation and brokenness behind the scenes, especially the trash on the shores. 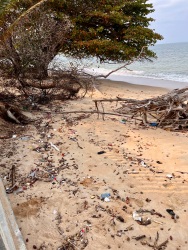 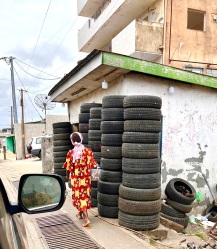 In contrast, further afield, on the outskirts of Libreville, (via a forty-minute 4×4 drive over bumpy dirt roads through the edge of the Congo forest), lies a stunning, rugged coastline where sea and sky meld into a nickel-colored light of other-worldliness. 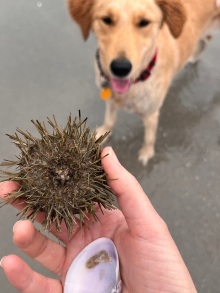 Along with its rich biodiversity, Gabon hosts malaria and other infectious diseases. Week One, Ramsay broke out in bright red hives from an allergic reaction. My Mama-brain went into overdrive for days as I sterilized sheets, towels, and surfaces. Should we treat it as something fungal or bacterial? Did it come from the ocean? the pool? new sunscreen? sand fleas? new plants, fruit juice, insects… or maybe from the laundry detergent? The Malaria Meds? ( I stalk mosquitoes in the house with my hands open in attack position as if they are tiny armed robbers). Alas, the source of the outbreak is still unknown, but we are enormously grateful Ramsay is on the mend.

The local food we’ve tried so far is good. Oil-rich Gabon imports 90% of its food, much of it from France. Commonly offered are grilled kabobs “brochette” of gambas, fish, or chicken served with rice, fries, or potatoes au gratin. The French influence is apparent in the grocery stores and boulangeries. To my delight, there are abundant cheeses, macarons, fresh baguettes, and good quality tea. And Mohammed at the unmarked Lebanese place near the airport makes very tasty Shawarma. We sit on his patio overlooking the main road (one of the few that are paved), where traffic is occasionally blocked by President Bongo’s siren-happy motorcade.

In an artisan market, I was informed that many handicrafts here are imported, too. However, I did find local bird collages made with butterfly wings (and I’m hoping this art was not created from illicit trade because I love this creation).

Awaiting our air and sea shipments to make our house feel more like home, I clean the screens and windows and re-arrange the furniture to claim this new space as ours. We engage with our new community of friends and begin to develop rituals, like having coffee on the beach, going outside to watch the sunsets, and sometimes indulging in local ice cream before lunch just for fun.

As we create wish lists of places to see, we remind ourselves on the difficult days to anticipate the magic that always comes with exploring a new land.